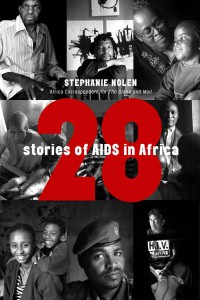 The book, 28: Stories of AIDS in Africa is a powerful piece of nonfiction, written by my partner, Stephanie Nolen, telling the individual stories of 28 different people whose lives have been affected by AIDS, one for every million people then infected with the virus. The book offers a powerful and nuanced portrait of a continent, how people’s lives were being affected, and how they were responding. A few of the 28 people profiled were famous, many were just regular people, and several were activists who had led the fight for access to medications and treatment. I had the honour of meeting and becoming friends with some of the activists.

This promo video was one of the first for Random House Canada, in their efforts to adapt to a changing marketplace. Together with Ngaire Blankenberg, we shot some short but piercing interviews with activists at the 2006 International AIDS Conference in Toronto and we also traveled to Swaziland to find a few regular people whose lives were being shaped by this story. Our video, I hope, gives readers a glimpse of the immense power and depth of this important book.

You can watch the promo here.