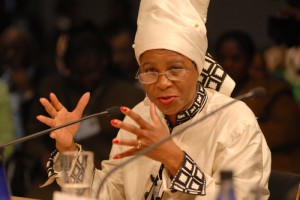 Mamphela Ramphele, despite being an inspiring South African in her own right, has always carried with her the legacy of Steve Biko. They were lovers, yet the fact that he was married to someone else has meant that their relationship has never fit easily into the mainstream imagination.

In Richard Attenborough’s Cry Freedom (1987), they are portrayed as friends only. In our half-hour film, made for an SABC3 series called Unathorized, we interviewed Attenborough as well as others who know Ramphele. We also re-cut Ramphele’s scenes from Cry Freedom to explore the legacy of a complex, fiercely courageous, and under-appreciated leader.

Honestly, I tried to maintain a critical perspective, but by the time I had finished making the film I was, and remain, her devoted fan. Her autobiography (1995) is totally inspiring. She’s apparently written a second autobiography which is being published in 2014.